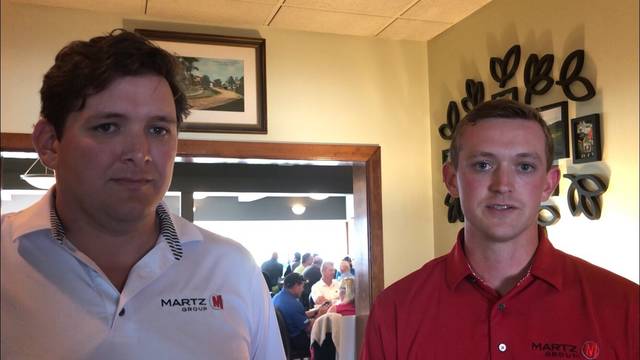 “Today’s tournament is all to benefit the American Cancer Society,” said John Henry, grandson of the late Frank and Dottie Henry, founders of the annual tournament that now carries their name.

Thanks to generous donations and sponsorships from local families and businesses, the Henrys were able to raise upwards of $130,000, setting a new record and smashing last year’s total donation by 30 percent.

“This is a really special and important day for our family,” Henry added. “Our grandparents were fundamental in partnering with the American Cancer Society. They’re really the reason we keep doing this.”

The donation was accepted by a representative of the American Cancer Society, James Kane.

“It’s truly amazing, the work (the Henrys) do putting this on,” Kane said.

The American Cancer Society is the largest funder of cancer research in the U.S. outside of the federal government, and the organization.

Cancer was an important cause to Frank and Dottie, started holding a golf tournament 36 years ago, with all of the proceeds being donated directly to ACS.

Over that time, the ACS reports that cancer-related deaths have dropped 27 percent.

“It’s safe to say, without your support, this wouldn’t have happened,” Kane said.

John Henry and his brother Scott offered thanks and praise to many, including Crystal Posten, one of the chief organizers of the event.

“Crystal does a lot of the behind-the-scenes work for us, making sure that the event goes off as well as it does,” Henry said.

While the brothers also lost their father, Scott Eduard Henry, as well as their cousin Olivia in the past year, they offered thanks in his name.

“My dad ran this tournament for I don’t know how many years, and I know he would want us to tell all of you how much he appreciates your support to this great cause,” Scott Henry said.

It is the mission of the Martz Group to provide safe, reliable, courteous transportation service at an affordable price.

With slow and steady growth, the Martz organization now employs over 400 people, operates 250 coaches and is nationally known and respected in the industry.

Martz Trailways runs many schedules to and from New York City and Philadelphia throughout the course of the day, daily runs to and from select Atlantic City casinos and semi-weekly Casino trips to the new Sands Casino in Bethlehem, PA.
Go to Top